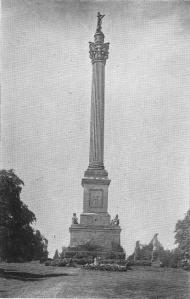 Last May D and I drove south to the Niagara frontier to see the Corpse Flower in bloom at the Niagara Floral Showcase and to visit Queenston Heights, because I’m working on a chapter about the battlefield.  The Corpse Flower gets its own post, though, as a kind of footnote.

Queenston Heights is a park that was once a battlefield.  You know it was a battlefield because there’s a very large monument to Sir Isaac Brock, the English General who led British and Canadian troops against the Americans in October 1812, and who died early in the battle.  The memorial tower rises aggressively on the Canadian side of the frontier, with Brock at the very top, pointing toward the American side of the river, as though the tower isn’t only to remind us of the general’s death, but to tell us where and how to look toward his American enemies.

D had just come back from the viewing platform at the top, and we were sitting near the memorial when an older English man, wearing sunglasses and a Tilly hat, started talking to us. He gestured to the tower and said, you know you can climb it? and told us how he had done it once, but he wouldn’t again.  Then he said, you know, they bombed it, in the 1840s.

It was the Fenians.

I think he was an Irish– I began, and then I stopped to try to remember Benjamin Lett’s name, but as I was thinking the man went on.

Then I said something I should not have said.  Before I tell you what I said, I will tell you what I meant which was far more thoughtful and nuanced than the thing that came out of my mouth.

I meant to say that Lett was a bit of a psychopath, sure, but he was also a follower of William Lyon Mckenzie before he bombed the monument.  Between the failed revolt of 1837, and the situation at home in Ireland, it isn’t surprising that a Canadian/American man of Irish descent—and revolutionary-if-psychopathic impulses—would attack such a conspicuous symbol of British imperialism. This was not a defence of his actions, but an observation regarding the many tensions that informed Upper Canadian politics at the time.

What I said was, Well, what do you expect, he was English.

First Brock Memorial, after the bombing. May 1840.

“He” was Brock, but I wasn’t referring to his death, only his monument.

That was also the moment it properly registered that the man’s English accent meant he was probably, you know, English. Then all three of us were talking at once, D making a snarky comment about me acting all Irish, me trying to elaborate on my point about Canadian politics in the 1840s so I wouldn’t sound like such a jerk, and this Englishman saying something about the impossibility of negotiating with the IRA and terrorism and Nazi sympathies, that ended with You know the Irish sent condolences when Hitler died?  At the end of the war, they sent their condolences to Germany.

My first thought was confused, because I was still thinking about Benjamin Lett. My second thought was where did the Nazis come from?

I tried to say something else, but he walked away and called it’s not worth talking about over his shoulder. D has since pointed out that Godwin’s law applies outside the internet.

Years ago, when I started thinking about military commemoration, I assumed that battlefield memorials belonged to the past. What remained to us, I assumed, was only a relict of something long resolved, a cultural text to be read and interpreted, like any other. I stopped believing this quite quickly, mostly because we seem to continue the arguments of the battle in the battlefield park—you have only to look at FLQ graffiti on the Plains of Abraham to see that.

I’m not saying that the Englishman I offended wanted to go to war, I’m just saying it’s exhausting, sometimes, to realize how close we are to that powerful clannishness. I’m not “Irish.”  My family hasn’t been “Irish” for nearly 200 years, but when D said in jest, oh, she’s just being Irish, to explain my comment, the Englishman’s attitude toward me changed.  There is no connection between my ancestors’ place of origin and my glib remark about Brock’s Englishness and Lett’s violence, but in that moment, he seemed to think there was, and I found myself on the wrong side of a national-racial line.  My glibness had put me there.

The view from the base of the Brock Memorial is the loveliest bit of the whole park. This picture is from an earlier visit, in 2009.

I love history. I love its stories. I love public parks and monuments, but sometimes I worry about what kind of nation we’re building with our renewed military obsessions. Why, now, do we revive our victories and nurse our defeats, whether Vimy or Dieppe or Queenston?  Why this preoccupation with making sure America knows that we won the war of 1812? I want to celebrate courage, and I want to remember, but I feel more and more often that there is a powerful singlemindedness to the way we are told to remember, one that seems less concerned with the moral weight of violence than it is with blood. And an insular clannishness that frightens me with both its ubiquity and its power.

We’re spending 28 million commemorating the bicentennial of the War of 1812 and I don’t yet know what that 28 million will buy. I worry that we won’t know for a long time.