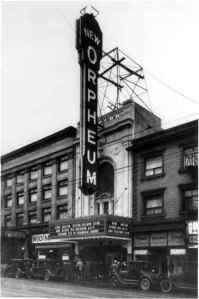 I’m writing this post as a break from what I should be doing, which is either preparing my next lecture, or revising a chapter about commemoration on the Plains of Abraham. I’m feeling a bit worn out by both projects, so I hope it’ll cheer me up to write about something I like.

Not like, even. I love Vaudeville theatres.  I love them so much that I’ve written a novel about an imaginary theatre called the Temple, in an imaginary version of Vancouver. My inspiration for the Temple came from the Orpheum and Pantages in Vancouver and the Paramount in Seattle, the McPherson and the Royal in Victoria. There’s a touch of London’s Grand Theatre about it, too, and maybe a little of San Francisco’s Castro (though that one was always a movie palace).

END_OF_DOCUMENT_TOKEN_TO_BE_REPLACED

I seem to be mostly writing sad stories about climate change these days. But I still really like ghosts, parasites, and AIs.